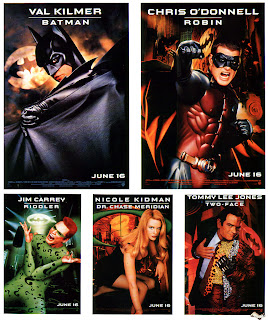 and im going to make its glaringly clear i am not a chris nolan Fan never have been never will be his batfilms are WAY overrated (begins was just Okay) the dark knight save for joker and twoface was a completely dull crap movie Especially for a BATMAN Film! and there are many who agree! another poster name unitedDCfan Posted all the things Wrong with nolans batman movies and he took every word and ever thought that i have ever had on nolans dull tired batman movies and posted it on the internet so im going to post it here! by the way for all us true batman fans thanx UNITEDDcFAN FOR THE POST!"Nolan pretentious Batman movies are Boring."


If you didn't notice yet, you must be lacking on what Batman is all about.

You must all keep in mind Nolan doesn't care about doing a Batman movie, what is doing is some kind of twisted realistic Universe, that just happens to have a guy dressed like Batman in it, and he expects to get praise and nominations for it, because in his mind and in the minds of the gullible Batman "fans" they have been induced to think Nolan is some kind of genius for making Batman boring.

Major issues on Nolan's Batman as a comic book movie:

2- TDK seems a Crime Drama 80% of the time. yES Batman is a DETECTIVE BUT HES A DETECTIVE IN HEIGHTENED REALITY NOT A FUCKING BEAT COP IN SERPICO

3- Heath Ledger gave a great performance as a Villain, but he was not the Joker from the comics.

4- Bale lacks charisma to turn Batman a likable character on screen. (The voice doesn't help either)

5- Should have more action, the movies are 2 hours plus and have big budgets, more action or editing is required.

6- Weird casting choices and unnecessary made up characters, for e.g. Katie Holmes being replaced by Maggie Gyllenhaal, does not make any sense, it doesn't matter if she is a "better" (Is not required a genius to play it) actress, the looks is sub-par and not convincing enough to have Bruce Wayne, Harvey Dent, and even the Joker somewhat fighting for this woman, and because of it TDK lost much of it's momentum when Rachel dies.
Rachel Dawes, Mister Reese, Ramirez, The Russian, Lau...all made up characters, that could have been replaced by cannon characters very easily, but instead Nolan decided to use his creative licence in the name of his own ego.

(On a side note about Bane in the upcoming TDKR, Tom Hardy as Bane is terribly miscast, it doesn't matter how good he can act, this is not the Joker casting this is Bane, Tom Hardy doesn't have the physicality to play Bane, if it's not necessary to be big, then why choose Bane in the first place? Why not using the Riddler or Black Mask? Bale is taller than Hardy, and if they are going to use the Mercenary approach he would still look more like Deadshot than Bane.
It is not very hard to find a taller actor that can act and bulk at will, you are very limited if you think otherwise.
Unless they use CGI or some camera tricks, I predict disappointed Batman fans, people who say physicality is not important on Bane doesn't have a clue)

7- Nolan's Batman movies due to over-realism makes the movie seem out of place sometimes, e.g. Batman on the Bat-signal rooftop talking to Dent and Gordon.

8- TDK Scarecrow cameo was disrespectful considering he was an average menace in Begins.

9- The inability of Nolan to portray any "over-the-top" villain or even a small reference to Robin on screen, because apparently he is too frighten of testing his own "skills", or simply lacks the imagination to do it.
Not to mention the panic state he enters when someone mentions crossovers, because it's too much for him to handle the bi-dimensional boring Batman, which realism and boredom is comparable to peek outside a window.

10- Hans Zimmer is the only reason some of the scarce action scenes seem(sound) somewhat interesting.


Most of the people who like nolans batfilms are not Batman fans even if they read comics, the ability to read and understand are two different things, some think they are, but most are Nolan's fans, that's why almost no one mentions (or forgives) the above rather obvious problems Nolan's Batman have as a comic book movie.
Someday a true Batman movie will be made, then people will look back and say how blinded they were by the over the top pretentious nolan
Posted by SuperKAL at 1:21 PM