JUSTICE LEAUGE WILL DEFINITLEY BE HERE In 2013 script is basically done GEOFF JOHNS REWRITING IT! 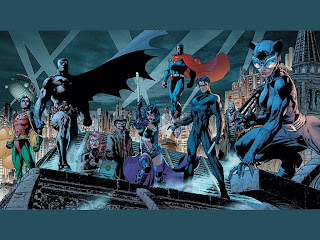 this is no april fools i dont do april fools its crap and childish. anyway this is to all the naysayers or idiots on bof (batman on film)! im Glad Jeff robinov made this annpouncement it shows WB still has Balls and can still make something batman & Superman related without any Nolan involvement(NOT A FAN OF NOLAN AT ALL) PRAISE THE LORD! this movie will make 2013 because the script is in place and has been since 2008 its the george miller script( i was really looking forward to that film) thats still intact and being rewritten and repolished by geoff johns of all people! thats awesomE! and this is another reason im looking forward to the JLA 1000 times over more than anything nolan will do in his next "batman movie well this poster from superhero hype named "DR Palmer Sums it up exactly how i feel. and i quoute"Guys, with this approach to the Justice League film it's an opportunity for them to go balls out and not be restricted by other films, which is a good thing. They can do all the heroes in their straight-up comic book renditions, instead of a super realistic approach ala Nolans Batman. They can hire an actor to play Superman who's built like a house (acting might suffer, but c'mon, we won't be going to see it for that). They can reference Oracle and Robin and Nightwing and any Batman villain without worrying about stepping on any toes, and etc. Basically I'm saying they're free to do the ultimate JL movie by not being tied to other films.

Oh and they tried doing this movie before, and it was in production for a bit and the reports on costumes and such were really great. So, all in all we should be optimistic about this. " nuff said JLA WILL RULE!
Posted by SuperKAL at 2:52 PM