Metallo to be the villain? General Sam Lane in the movie?! We said it here First! 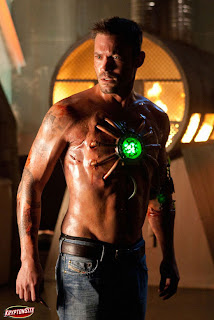 more confirmation courtesy of movienews of something that we Reported here FIRST! courtesy of Mr H that Metallo would be one of the villains in MAN of Steel and that General Same lane wich Mr h also reported(a role being eyed for ED harriss) will feature in the film! here is more of what movienews says! Metallo To Be The Villain?
A possible synopsis for the upcoming movie as well as some apparent plot details reveal new information about the plot including the fact that General Sam Lane and the Kryptonite powered Metallo will be facing off against Superman...
Here is what Movienewz claim to have been told by an anonymous source. There's a lot of information here, and no reason to doubt their word. The following certainly seems to fit with what we've heard from both director Zack Snyder and the various actors involved, but as with any rumor, it's best to take it with a pinch of salt for the time being!


General Sam Lane, the father of Lois Lane, is a central figure in director Zack Snyder’s Superman reboot. This really is as Zack described in several interviews about the film, a “real world” Superman. I’m told that when Superman arrives on the scene; people don’t know what to think. He’s an alien from another planet. What are his real intentions? He’s not human and that scares a lot of people. Here’s a guy who can fly, see through walls, is bullet proof and can lift a tank. The military views him as a potential threat to national security. They find kryptonite, pieces of his home planet, and discover its radioactive elements can be harnessed as a near unlimited source of power, both literally and figuratively. It’s a brand new form of energy that is secretly developed by the government. The military, under the direction of General Sam Lane, uses kryptonite to power an experimental cyborg super solider named Metallo. He’s ultimately exploited as a weapon against Superman.


And here is the brief synopsis of the movie which the site describe as an origin story which bares little resemblance to Richard Donner’s Superman: The Movie and its sequels.


In the pantheon of superheroes, Superman is the most recognized and revered character of all time. Clark Kent/Kal-El (Henry Cavill) is a young twenty-something journalist who feels alienated by powers beyond anyone’s imagination. Transported to Earth years ago from Krypton, an advanced alien planet, Clark struggles with the ultimate question – Why am I here? Shaped by the values of his adoptive parents Martha (Diane Lane) and Jonathan Kent (Kevin Costner), Clark soon discovers that having super abilities means making very difficult decisions. But when the world needs stability the most, it comes under attack. Will his abilities be used to maintain peace or ultimately used to divide and conquer? Clark must become the hero known as “Superman,” not only to shine as the world’s last beacon of hope but to protect the ones he loves.


Pretty interesting, I think you'll agree! Metallo may seem like an odd choice, but the various ways in which he has been portrayed in the comic books over the years would certainly give Snyder freedom in turning him into a formidable foe for the Man of Steel. Be sure to share your thoughts in the usual place!

Starring Henry Cavill as Superman and Amy Adams as Lois Lane, Superman: The Man of Steel is expected to be released sometime during the Winter of 2012
Posted by SuperKAL at 11:30 PM