DEAN CAIN THOUGHTS ON HENRY CAVILL IN MAN OF STEEL! 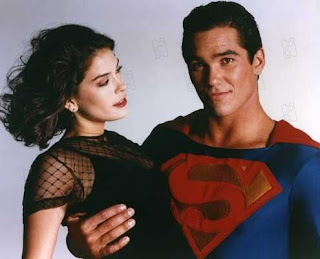 Dean Cain Offers His Thoughts On Henry Cavill As Superman
Dean Cain who is best known for portraying Superman in the show Lois And Clark: The New Adventures of Superman recently gave his thoughts about Henry Cavill being cast as The Man Of Steel.


Dean Cain played Superman for four season on the show Lois And Clark The New Adventures Of Superman, and The Belfast Telegraph caught up with Cain to get his thoughts on Henry Cavill being cast in the lead role of Zack Snyder's Man Of Steel.


"They (journalists) asked me because he's a Brit you know, so they said 'a Brit's going to go play Superman and it's a big deal. How did I feel about that?' like it's a big affront."

"I have no problem with that whatsoever because the reality is the character himself Superman was from another planet but he was raised in the middle of America with small town American values."

"It's a tough role. I think he's going to do fantastically he's a very good actor. You never know what you're going to get into. It's a big role, it's an iconic role. I wish him luck."

"I have one son, he's eleven years old and he's very well aware of that fact(that I played Superman), yes. He gets reminded by his buddies and then he reminds them quickly that he's not really Superman,

Man Of Steel starts shooting this Summer and will be released in late
Posted by SuperKAL at 4:21 PM