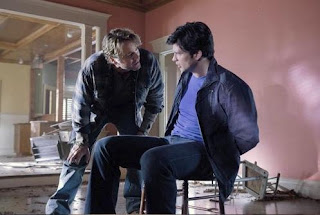 Smallville begins its stretch run to the series finale on April 15, when it returns with the episode "Kent."

The installment will find Clark in the alternate universe into which he got pulled on "Luthor," this time due to the actions of his evil, alt self. When father Jonathan runs into his son, he mistakes him for Ultraman, resulting in the following scene: