JONATHAN KENT TO RETURN TO SMALLVILLE! will PETE BE FAR BEHIND? 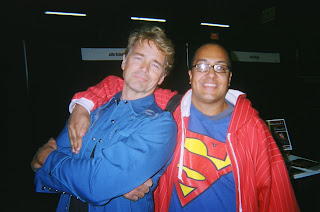 and i couldnt be More estatic about it i met john Schneider at laster years comic-con in New york! and God Bless him, hes the Most Standup kindhearted awesome guy ever! and i told him Smallville hasnt been the same since hes been Gone, so it is with GREAT pleasure with this news coming from IGN!
Smallville: An Original Cast Member Returns
A pivotal part of Clark's past is coming back.

As Clark Kent goes into his tenth and final season of Smallville, and closer towards his destiny as Superman, he'll also be looking back into his past - as a pivotal character from the show will be seen for the first time in years.

None other than John Schneider is set to return to the series in Season 10, reprising his role as Clark's adoptive human father, Jonathan Kent.

Obviously Jonathan's return raises some questions, given that the character died back in Season 5. I can't reveal yet the how and why of Jonathan's appearance, but I can tell you that we'll see him in the season premiere, entitled "Lazarus." In addition, Schneider is expected to appear in at least one other episode as the season continues.
Posted by SuperKAL at 6:14 AM