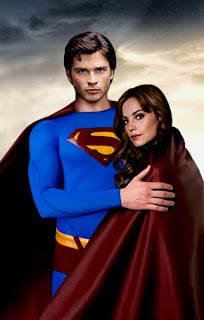 July 8, 2010: Could Chris Columbus Direct Superman? from SUpermanHomepage
Superman Movie News As we know, Warner Bros. are aiming to have a new Superman movie released to cinemas before the end of 2012. A source inside the studio has revealed to the Superman Homepage that an "offer has been sent out to Chris Columbus to direct the 3D Superman reboot for December 2012".

Columbus, who directed the first two "Harry Potter" films for Warner Bros., is reportedly considered "the right fit" for the Man of Steel by those within the WB and Legendary Pictures.

Christopher Nolan will be producing the film, from a script written by David Goyer.

"David Goyer really wanted to direct but nobody from either studio think he's good in that arena," reveals the studio insider. "He's great at coming up with story and ideas, like George Lucas. It's his execution where he's weak which is why people like Chris and Jonathan Nolan and Guillermo Del Toro have had the best results with his scripts."

Whether Chris Columbus takes up the offer, or even if said offer really exists, will be revealed in time.
Posted by SuperKAL at 6:00 AM