THE WONDERTWINS ON SMALLVILLE? FTW? 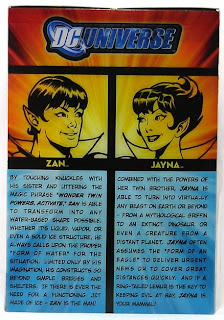 lol hi Andre here im neither here nor there when it comes to the WonderTwins. i dont hate them bet sometimes they seemed to come off as excess Baggage back in the Superfriends Days. but im very intruiged to see how Smallvile will update them for the new Millenium! hopefully it will be in the Form of Coolness! Smallville is now casting the roles of "Twyla," a "Pixie-punk teen," and her brother "Tanner," a "hot skater dude." *Cough*Zan and Jayna*cough cough*
- These two spray paint an "S" on the roof of a bad guy's limo, to catch the attention of their "idol," the Blur.
- Later, the duo visit Watchtower and see all of the high-tech gear that Chloe has within. Jayna "Twyla" asks Chloe if she's actually met the Blur, and if she is the Blur's sidekick. Chloe tells them that Watchtower provides support to all of the heroes of Metropolis. "Twyla" wants to tweet her "group" about what she has seen, and Chloe warns that if she says one word to anyone about it, any trace of her virtual existence will be evaporated.
- A sign of the current state of the Chloe-Clark interaction: Chloe tells them that "if you get good enough at it, one day you might find yourself saving your best friend, from an enemy, or even from himself."