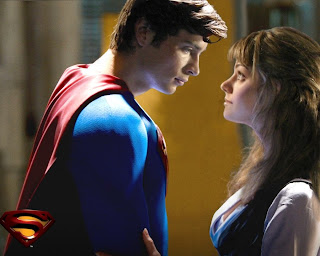 But he is hesitant about it when questioned! In an interview with slashfilm, the "V For Vendetta" director shoots down a couple of other rumored movies he's attached to, but not Supes!
In the interview McTeigue discusses certain other comic book movies he has been linked to, including Plastic Man, X-Men Origins: Magneto and a Superman reboot.

The Wachowski brothers wrote a script for a "Plastic man" movie back before "The Matrix" made waves. But McTeigue says he doubts that will ever see the light of day...

“Obviously, Larry and Andy, did a script for Plastic Man back in the day. I’ll be very surprised if that movie gets made. We haven’t ever really talked about it. But I know it’s still a Joel [Silver] property or a Warner property…”

Next up, it was rumored that McTeigue was in talks to replace David Goyer on "X-Men Origins: Magneto". The IMDb page for the film even started listing McTeigue as “in talks” for the project. Nope!

“[Magneto] was just one of those rumors that started out and I don’t know where it came from or how it came up.”

But when asked about the big blue boyscout, the director is not as quick to deny that he may be helming a reboot!

"Last week IESB reported a rumor that Warner Bros and DC Comics were in talks with Andy and Larry Wachowski to produce a Superman reboot directed by McTeigue. I asked James if there was any truth to the rumors what-so ever, and he laughed kinda nervously, and paused for a second, before giving me an interesting non answer:

“You know… I… I would say… I’ll keep you guessing, actually. It’s good not to dispel every rumor, right?”

James had been so forthcoming on previous questions, and quick to deny false rumors. I hate to read too much into his answer (or as it may be, his non-answer) but his hesitation seems to suggest there might be something to it. Maybe there have been some early talks, or possibly it is something the Wachowski Brothers are developing. But the non denial seems rather odd, especially coming off of denials on a handful of other rumored projects."

Is this hesitation just reluctance from McTeigue to deny all rumors? Or could he really be the man to get Supes in the air again?
Posted by SuperKAL at 7:04 PM