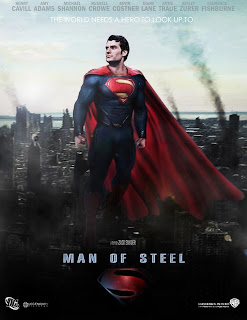 thanx to Matt for Cosmicbooknews for the info! MAJOR MOVIE & CHARACTER SPOILERS BE WARNED!!

Movie is  2 hours and 24 minutes in length.
All Superman's powers are on full display, although no freeze breath was mentioned.
Krypton is destroyed. Zod kills Jor-El; however, Zod is not killed in the planet's destruction.
Lois knows Clark's secret pretty early on in the movie.
Kryptonite is not used, but it has been discovered and is being studied.
Three main battles take place with the last being in Metropolis and a significant amount of the city is destroyed between the gravity ray that Zod uses on the city and the final battle with Superman and the robot space force.
Faora is killed, with Zod taken to a prison planet...now left for Superman to manage (I guess it's where he will take future super villains) as that is what is implied in the movie.
Lex is mentioned twice, but never shown.
No cameos from other heroes.
Brainiac is mentioned, but never shown.
Krypton is described as more of a futuristic city with no ice crystals at all, although he said most of Kryptons effects were unfinished.
There is a robot army that Zod brings to earth. They were with him on the prison vessel and he reprograms them to serve him. They were originally designed to be guards on the prison planet (phantom zone) where Zod was being taken.
I believe my brother said there were around 30 or so with one being bigger and stronger than the others; I guess like the lead robot. When it's destroyed by Superman, Zod takes the armor and designs a suit with it to aid him in battle with Superman.
That's all I can think of right off the top my head. I'll talk with him tomorrow and get some more info. Thanks for being positive and you can share what you like.

I just spoke with my brother for a few minutes over the phone. It seems Snyder is busy cutting another trailer - I don't know when it will come out - but that's what they're working on at the moment.
He claims Shannon's Zod is probably going to end up being one of the greatest movie villains on screen.
He says that Zod is amazingly well written.
Shannon gives the best performance of the movie, and he has just as much screen time as Cavill.
Cavill looks really good in the suit. He's a massive presence on screen and he looks like Superman straight out of a comic book.
The colors look different on the suit than what we've seen. I'm not sure if it's cgi enhanced or just the lighting, but its a lot brighter and vibrant looking in the actual movie footage.
Zod wears a similar suit, but basically all black. He does have a cape when he's first shown wearing his suit, but mostly he's shown without it.
The quick shot of Superman flying down the building towards Zod to do battle is from the final fight scene, and there's an epic collision that shatters windows and shakes buildings when they clash.
He used the words epic every time he described an action sequence.
The movie goes pretty deep into trying to understand how it would go if these aliens just showed up one day out of nowhere.
There is definitely a Nolan feel to the movie.
The military plays a large role in the movie; there are experiments going on behind the scenes.
Metallo is never mentioned or shown, but there is a scene with an injured Air Force pilot where they talk about using him for a secret project and the kryptonite is mentioned - although never referred to as such - it's called "the meteorite."

I had a conversation with him just now and I tried to get all your questions answered.
The budget was initially $185 million but later increased to $215 million after Snyder showed higher ups his quick story boards ideas of some of the action sequences he had planned for the film. It was later increased to $235 million to account for extra cgi cost and the added 3D.
The movie is more massive than you can imagine with huge sets built and amazingly shot action sequences. Snyder makes great use of every penny in the budget. The only thing he can compare this to is the action in The Avengers, although he claims this is better shot and feels more real.
The original script only had two main battles; the third was added by Snyder himself.
Jonathan Kent dies, Clark is fully grown at the time, but not yet Superman. Zod does not kill Jonathan, although in the original script he did. Zod does kill several military personnel and civilians in the movie. The loss of life gravely effects Superman.
The robots, except for the main guard, are disposed of very easily. If you're expecting a huge scene with Superman fighting all these robots you will not get it. They're all taken care of at one time - and very easily - using his heat vision.
He is called Superman in the movie, but not at first, he's called "the alien" originally.
Lois is the first to call him Superman, and the name catches on.
He learns of his origins in different ways. Jonathan is the first to tell him where he came from after his powers start to show up. After discovering his hidden ship, Jonathan tells Clark more about his origins and gives him the key that was found with it. Clark also triggers a hologram message from Jor-El using the key that explains details about his home world. Later in the film after Clark opens up the fortress, he talks with another hologram of Jor-El and discovers the suit and how it works and the source of his powers on earth.
Faora is killed by Zod.
The prison planet is an actual planet. It's smaller though and described as something like a moon to another planet, although very far away from Krypton itself.
A scientific explanation is given for all Superman's powers, and it grounds this movie and makes it feel even more real, or as real as a movie about a super powered alien can be.
There's a huge twist at the end of the movie that I'm trying to get out of him now.
Will update you later.
Lastly, the suit will be nano-tech like the New 52 DC Comics
Posted by SuperKAL at 8:56 PM