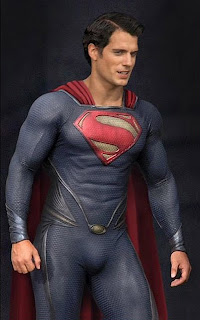 Thanx courtesy of Nuke the FRIDGe.com This is Josh Ballze, host of NTF’s weekly rundown reporting:

Thanks to good sources of mine, mostly in the industry working as grips, craft services, or other jazz, I was treated to some behind the scenes footage of the filming of “MAN OF STEEL.” That’s right, Zacks’ (Director of 300) new Superman flick which is poised to break the chains of the Franchises ongoing Hollywood curse. From the failed Tim Burton production of “Superman Lives” to Brian’s (X-Men) not so great “Superman Returns” and even the last season of “Smallville”, the franchise just can’t seem to get things right….enter Mr. Zack Snyder. Now it’s too early to say just how this film will go, either to carve it’s way into heroic cinema history with all the raw power of a locomotive, or fall from the skies; yet another reminder of how even the most super of franchises can fail. From what I’ve seen and heard though, at the very least it’s going to be quite a show. And good or bad, I’m always up for a wild ride.

The footage confirms that the shooting schedule for Edwards Airforce Base in CA was indeed true, and now we know what it was they were filming. The scene is set up in the bases’ proving grounds, vast dried flatlands as we spy a barricade of some sort. Concrete military dividers form a crude wall as soldiers and Tanks gather with all weapons prone in one direction: the other side of the wall. Who’s on the other side, none other then Superman and Faora: General Zods wife. She is indeed sporting a black alien uniform, her hair sleek back, draping down to a long black cape as it blows in the desert wind. She and Superman then walk over to a vast technical array of lighting rigs, camera dollys and a massive green screen: his own red cape dancing on the winds as dust is kicked up in their path. From this point the footage takes a page from “Chronicle” as it spins and falls, tucked away by the mystery cameraman as everything goes black. Our mystery source has indeed provided me such a covert scoop it would make even Lois Lane flush with envy.

For a while we speculated on what was being filmed, and only timidly did we dare to address and speculate about this footage here on NTF’s “Weekly Rundown” Premiere episode. Then, a series of emails came to light to enlighten us as to what exactly did our eyes behold. From what I understand, the scene was the films…or rather, Earth’s military force meeting with Zod’s own force (His own person not present) to strike some sort of deal. So, besides Faora and Kal-El, what other alien presence was on the other side of that wall? A Kryptonian ship apparently, hence the giant green screen. I then proceeded to conspire the meaning behind the Kryptonian ship in a manner that mirrored Lex Luthor himself. Are we now talking about more then three Kryptonians? Was this an invasion? Was it Clark’s ship perhaps? And then, another email. Yet another source confirmed thee actual DIALOGUE between actors Henry Cavill (Superman), Christopher Meloni (Colonel Hardy), Antje Traue (Faora), and Amy Adams (Lois Lane). The following is my rough interpretation being I cannot post “Thee” actual email for fear of blowing my sources cover:

{Exterior Shot} Various Military vehicles and 200 military soldiers are prone, all in formation as if ready to stand off as they wait for TWO female Kryptonians to land their ships. Among them is Faora as she walks past Superman, himself standing and ever ready. Faora then walks over to Colonel Hardy who stand with his men behind the barricade as she begins to speak-

“General Zod wants this woman to come with me.”

Faora then gestures to non other then Lois Lane. Hardy is quick to object-

“You asked for the Alien, you never said anything about one of our women!”

“Shall I tell the General you are not willing to comply.”

Lois then follows Faora as they walk back to the ship. Superman however tries to stop her fearing for Lois’ life. Faora then finally addresses Superman-

“If I was going to kill her she would be dead already. I am incapable of emotion…”

The rest then becomes inaudible. But now I understood. In this context General Zod demands the presence of Superman, in which the military set up a meeting to give him the “Alien”. Sending Faora and yet another unidentified Kryptonian in what now has turned into TWO ships, they arrive to not only take Superman but Lois Lane as well. Lois agrees as they all depart to meet the dreaded General Zod!

Along with this I had received another email summarizing an additional scene where Faora smashes her way through a C-17 and vaporizes the men inside, this also being shot at Edwards. My suspicions…heat vision.
Posted by SuperKAL at 3:22 PM