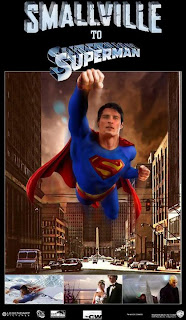 COMICS: Writer Brian Q. Miller Reveals More Details About SMALLVILLE: SEASON 11
Hit the jump to find out more about Smallville: Season 11, the planned comic book continuation to the CW television series. Included are details from the writer on the positions of Lois Lane and Lex Luthor in the series and much more.
Josh Wilding - 2/13/2012
Thanks to Comic Book Resources, we have plenty of new details on Bryan Q. Miller and Pere Perez's Smallville: Season 11. Personally, the finale of the show was such a massive disappointment (as were the last few seasons for the most part) I can't help but be equal parts curious and repulsed by this series. How do you feel about Smallville being continued in comic book form? Check out the interview below (even more can be found by clicking on the link at the bottom of the page) and then be sure to sound off with your thoughts in the usual place.


On The Direction That Smallville: Season 11 Will Take:

Season 11 is about all of our players transitioning into the next phases of their lives. Work, love, heroics and villainy all play a part in how they're settling into a very "Look! Up in the sky!" world. The season premiere, as all of ours historically have, sets up not only the plot-journey for the year, but what everyone's personal struggles will be. That isn't to say there will be tons of angst. There's only a bit of angst here and there. The goal is to make this as entertaining a read as possible, and Clark's at our center for that. He's how we'll process that information. He's Superman now. No more hiding in the shadows in a black trench coat or a red jacket. He gets to shake hands with the people he saves. He likes flying. He's transitioning from seeing his abilities as a burden to seeing them more as a job. And he loves his work.

Storytelling-wise, Season 11 episodes are -- bigger. Each episode is more like a mega-episode, or a TV movie that continues the "Smallville" saga. If you're going to buy a chapter each week, I'd like you to feel like you've gotten your money's worth by the time each mega-sode ends. If you're picking it up collected in print issues, you're going to get a substantial read every month.


On Whether We'll See Any Other DC Characters Turn Up:

Oh, sure. Big time. We'll get a slightly new twist on a pretty big Superman villain from the comics in the premiere (which runs the first 12 weekly chapters). After that, the second episode spends quite a bit of time introducing Superman to a very popular member of the DC family -- something tells me it will (hopefully) go over well. Beyond that, some returning allies and some new enemies, all around.


On What Differentiates This Comic Book Series To The Other Superman Books On The Stands:

It's in the title -- it's "Smallville." It's an ensemble piece with Clark Kent at its core. These are continuations of the characters roughly two million people a week, half a year each year, for a decade tuned in to see. If you're someone who stopped watching the show in the early years, come on back. They aren't in high school anymore. He's in the suit. Like, all over the place. You're going to get Superman action. You're going to get derring-do from Green Arrow. Lois and Clark are together -- and happy. So there's some romance there. And Chloe. And Chloe! Chloe Sullivan is here -- you won't find her anywhere else (as far as I know!).


On The Role Of Lois Lane In The Series:

Our dynamic duo are ships in the night. Lois' career is on the rise, thanks to her exclusive with the President during the Apokolips event (or "Contact" as the locals are calling it), and Clark's non-Daily Planet time is spent Supermanning. They're a couple in the big city who are trying to find time for one another as they get their "careers" started. Add to that that the general populace knows aliens exist. It doesn't spoil anything to say (as it's a page 1 reveal), that someone spotted alien slaves on the surface of Apokolips when it was in low orbit in the Finale. We're finally fine with super heroes patrolling our streets and skies, but xenophobia is now very real. The last thing Lois wants is anyone finding out Superman is from Krypton.


On The Role Of Lex Luthor In The Series:

Lex might not have memory of his life before the finale, but he still has his instincts and something tells him he can't trust Superman, regardless of how much good he's doing. He watched Superman push a planet out of our orbit -- which means there's someone among us with the power to push a planet out of orbit. That doesn't sit well with Lex. He sees Superman as a potential terrestrial threat, and is deeply entrenched in the xenophobia bandwagon brought on by Contact. Lex has transitioned Luthorcorp to Lexcorp, and he's doing everything in his power to help the world protect itself from threats beyond the stars.
Posted by SuperKAL at 11:08 AM