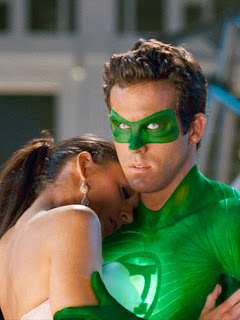 Ryan Reynolds
Courtesy of Warner Bros. Pictures
The studio won't walk away from the superhero franchise, despite the film’s soft box office performance. and im Glad they are this was a Great Film and it deserves a sequell there was Nothing wrong with the Original and RYAN REYNOLDS DEFINITLY NEEDS TO STAY!

Sources say Warners still believes in the franchise, even if the studio is “somewhat disappointed” with Green Lantern’s result.

Warner Bros. president of domestic distribution Dan Fellman said the movie is settling in, pointing out that fanboy pics often see a significant drop-off in their second weekends.

Similar films that have seen the same sort of dip that Green Lantern did include Hulk, which dropped nearly 70% in its second outing.
Warners, preparing for the end of Harry Potter, needs new franchises, so was willing to invest big in Green Lantern.

A formidable obstacle standing in Green Lantern’s way now is Paramount’s Transformers: Dark of the Moon, which opens in theaters around the globe on Tuesday night.
Posted by SuperKAL at 2:07 PM