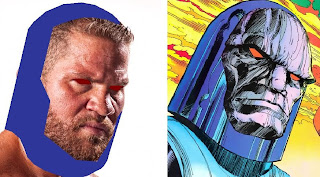 according to Ed gross & and tipster Mr Vancouver Matt Morgan is in talks to Portray the Physical Embodiment of Darksied. this is what they were told. Morgan was one of the people up for Doomsday in season 8 but Lost out to Dario Delacio. He stands 7'0 tall and Bulked up and Massive. and im told there will be a costume Worn a Bit like the Doomsday Costume but Not a Full bodysuit. Instead Head gear and Bodysuit. but his Natural arms and size will be painted gREY Along with face Prosthetics. He wil be introduced towards the VEry end of the season around episode 20! thanx to ed gross from voices from Krypton for the scoop!
Posted by SuperKAL at 11:02 AM